In chess, the ‘touch-move rule’ states: If a player (whose turn it is to move) touches one of his pieces, it must be moved if it has a legal move. In addition, if a piece is picked up and released on another square, the move must stand if it is a legal move. If an opponent’s piece is touched, it must be captured if it is legally possible to do so.

If a player wishes to touch a piece, usually to tidy it up on its square, he is required to say “J’adoube” (French for “I adjust” but it could be worse, they wanted to settled on a Russian term) to inform his opponent that he wishes to adjust a piece BEFORE he touches it. This rule can be difficult to enforce because usually, the only witnesses are the two players themselves. 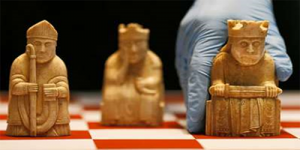 I once fell victim to it in a game against Solihull Chess Club. I made a common mistake (for me anyway) which I would refer to as the ‘forget to play the first move syndrome’. To one move option, there is a forced reply and analysis continues from that point. Deciding that it is strong, you play the first move of the analysis, forgetting to play the initial forcing move. I picked up the Queen and realised that I couldn’t put it on the intended square because it was still occupied by my first piece. I set the Queen back down and realised that there was no other safe square for it. My opponent had obviously gone through the same analysis because the moment of realisation was accompanied by his whiny Brummie tones, made all the more delightful by the situation, declaring “yon tooched it, yon gotta move it”. I couldn’t argue with his reasoning so the game was lost.

I had several options available a) rigorously deny the charge in the hope that no-one else saw b) quietly leave the room – and drive home… at least he would have to sit there for an hour before being able to claim a win on time c) refuse to shake hands pointing out that he contributed nothing towards the win and decline to give him the benefit of your post-game analysis or d) accept the loss gratefully.

Thankfully, in calm hindsight, I made the right decision and we parted friends. It is not always that way though:

In one famous instance in 1994, Garry Kasparov changed his move against Judit Polgár after momentarily letting go of a piece. Kasparov went on to win the game. The tournament officials had videotape proving that his hand left the piece, but refused to release the video evidence. A factor counting against Polgár was that she waited a whole day before complaining, and such claims must be made during the game. The videotape revealed that Kasparov did let go of the piece for one quarter second. Cognitive psychologist Robert Solso was even called in to give evidence that it was too short a time to make a conscious decision.

There was an incident between two tournament players, who obviously didn’t share a very harmonious relationship. One player was irritated by his opponent’s constant distracting J’adoube declarations to make sure that his knights were pointing directly forwards. In retaliation, he started to constantly declare J’aboube to adjust his knights to point sideways whenever his opponent was deep in thought. In the end, the tournament controller had to be called in because they were disturbing other boards.

Perhaps the most famous incident, certainly the one most liked by chess players, occurred in a game between Milan Matulović and István Bilek at the Sousse Interzonal in 1967. Matulović played a losing move but then took it back after saying “J’adoube” . His opponent complained to the arbiter but the modified move was allowed to stand. Not without penalty though; Matulović had immortalized himself in the chess community being henceforth known throughout the World as J’adoubovic.

To finish on a light note: in a correspondence game, during a very tense middle-game, a player tore open a much awaited letter anxious to know what the next reply was only to find that it read simply “J’adoube”. Which became the basis for a favourite chess joke.