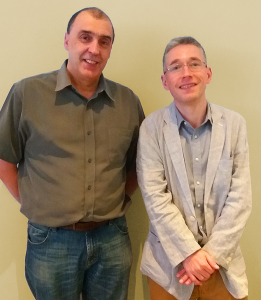 On Saturday 17th, 25 chess enthusiasts had the pleasure of playing GM Mickey Adams in a simultaneous exhibition. The five times and reigning British Champion has, during his paying career, beaten the likes of Anatoly Karpov, Vishy Anand, Vladimir Kramnik and Magnus Carlsen and has been ranked as high as World #4.

I was very pleased to be among them and to be taking part in my first GM simultaneous exhibition for well over 30 years. Michael won 22, drew 2 and lost 1 (David Levens). Whilst not among those fortunate enough to draw blood. I was very pleased indeed with my performance.

It is quite difficult to get focus in an exhibition situation because there is too much temptation to look around at the general proceedings which is compounded by a general awe of the chess star in the flesh that you have only previously seen on websites or in magazines. Before you know it, he is coming around to your board again when you will be compelled to make another move.

That said, I managed to play pretty solidly and was pleased to find myself transposed into a Cambridge Springs which I proceeded to deviate from in an irrational need to get out of ‘book’. It felt like something of an achievement to reach 40 moves with a tenable position with an engine later patting me on the back by demonstrating that I had never been worse by more than a point or so. I was a bit too keen to exchange pieces off with the slightly stupid feeling that the less pieces there were on the board at the end, the better I had done. 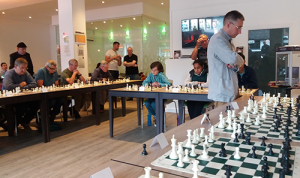 Generally, Mickey was pretty savage and despatched most of the players I had visibility of either side of me with impressive mating attacks. Although somehow saved this indignity, it was very impressive how Mickey converted his advantage into the straightest line win with moves that I wasn’t expecting and by now, had too little time to recover from before he was back again. 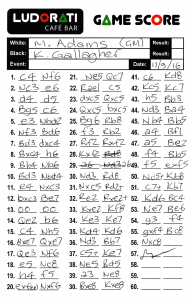 I was pretty impressed that several of the players that survived longer than me were juniors from West Nottingham chess club. I think last to finish was Jonah Willow already graded 186 at age 13.

Also worthy of note is the venue and organisers – Ludorati Game Café (Nottingham). It opened early this year and caters not only for chess and classic game players but for almost every conceivable board game. Extremely nice place and I hope that Rollie and crew enjoy the success they most definitely deserve. Great afternoon!!