When I play blindfold chess, the first four or five moves that characterize the opening don’t present too much of a problem, and I am reasonably okay when the game resolves to King and pawn versus King, or King and Rook versus King, but I have to admit, I have to look at the board for the bit in-between. So, I guess my efforts might better be described as peek-a-boo chess.

I don’t feel any better about my pathetic attempts when I look at some of the more remarkable achievements in that field. 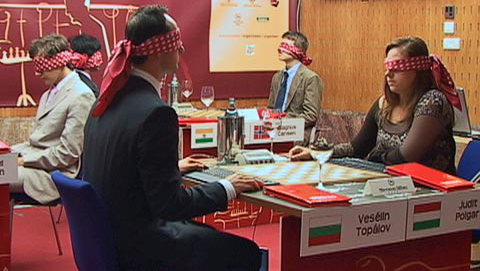 Although the ability to play blindfold chess is recorded as early as 1266, the great French player André Philidor seems to be the first of real chess interest after demonstrating his ability to play up to three blindfold games simultaneously from 1783.

The phenomenal Harry Nelson Pillsbury is worthy of note. His famous party trick was to play numerous opponents at blindfold chess, checkers and whist simultaneously whilst reciting a list of long words that had been shown to him for just a few seconds. In 1900 he played blindfold against the 20 strongest players of the Franklin Chess Club in Philadelphia with a score of 14 wins, 5 draws and 1 loss. In 1902 he was the first to cross the twenty barrier by playing 21 simultaneous blindfold games against the players in the Hannover Tournament with 3 wins, 11 draws and 7 losses.

In 1924, the great Alexander Alekhine played 26 simultaneous blindfold games against very strong opponents with the very impressive result of 16 wins, 5 losses, and 5 draws which was the strongest ever exhibition at the time. The following year in Paris, he took on 28 teams of four players (with artificial claims of playing over 100 players at a time blindfold). Nonetheless, he achieved 22 wins, 3 losses, and 3 draws. In the same year, Richard Réti bettered this by playing 29 games simultaneously. Not to be outdone, on July 16, 1934 in Chicago, Alekhine set the new world record by playing 32 blindfold games with 19 wins, 9 draws and 4 losses. The referee for this event was no less than Edward Lasker, himself a strong blindfold player, because authentication of claims without using confederates had become important.

George Koltanowski set the world’s blindfold record on 20 September 1937, in Edinburgh, by playing 34 chess games simultaneously while blindfolded, winning 24 games and losing 10 with no losses.

By 1947, Miguel Najdorf beat his own record of 40 simultaneous games set in 1943 by playing 45 games. A record which stood until 2011 when German GM Marc Lang played 46 with 25 wins, 19 draws 2 losses. His opponents’ USCF ratings ranged from 1200 to 2300; a record that still stands. A number of attempts have been made at playing blindfold against 50 players simultaneously but none have yet succeeded before their head has exploded.

Blindfold chess seems to be within the capability of most World class players and Jose Capablance, Reuben Fine, Bobby Fischer, Victor Korchnoi, Anatoly Karpov and Gary Kasparov were all strong exponents.

Interestingly, Mark Staley, a Trent (Burton) Chess Club player around thirty years ago could play blindfold even though he was not a particularly strong player. I did play a demonstration blindfold game with him once in front of a gathering of chess players. I did not, of course, resort to wearing an actual blindfold because any so-called friends of mine would be likely take the opportunity to quietly vacate the room.

The hardest part of the feat was not, as you might expect, the middlegame – it was keeping a straight face as I strained to make up the next plausible sounding random move from a game that would have made no sense whatsoever on a real board.