Not long after I had learned to play chess, in the wake of the 1972 World Championship that immortalized Bobby Fischer not just to the Chess community but to the entire World, I remember going to watch ‘Enter the Dragon’ which brought the equally iconic Bruce Lee to our attention.

On exit from the cinema, the local Chinese restaurant fraternity, who were unusually well represented, were treated with a noticeable respect with the newfound appreciation that despite their diminutive size and humble stature, they could probably take your ear off with a swift mid-air kick. Significantly, having just got going with chess, this lead to a parallel passion, that of martial arts which was to lead to a relatively successful tournament career, eventually ditched after a dislocated shoulder and three false teeth.

I could at least console myself with the thought that if I lost on the dojo mat, given the chance, I could likely take revenge on the chess board.

Chess in China had a very secondary following to both Chinese Chess (Xiangqi- worth half a million points on a Scrabble triple word) and Go which was probably their excuse for being a weak Chess nation. There was a well-known saying “Chinese may know how to fight, but don’t know how to use a knight”… okay, I just made that up but the sentiment was there. 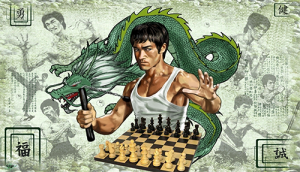 Alexander Alekhine was the first great chess player to visit China in 1933. In an exhibition played in Shanghai, he was held to two draws, one to Xie Xiashun, one of the leading Xiangqi players of all time.

Chess was banned in 1966 as part of the Cultural Revolution with the Chinese being ‘instructed’ to stick to the more traditional Xiangqi. This only began to lapse in 1974 with official International play not resuming until 1976. During this period, an historic meeting was held in Kuala Lumpur to decide how to raise the level of chess in Asia to reach the highest levels. It was first promoted in China where it had the strongest following. The plan became known as the “Big Dragon Project” and had the ambition of China reaching World-class status by the end of the century.

China first took part in the biennial Chess Olympiads in 1978, Buenos Aires, where they finished a commendable 18th. Progress was steady and in 1986, Dubai, they tied for 5th place. In 2006, Turin, they received their first medal finishing 3rd.

Women’s Chess became far more popular in China as a result of Xie Jun becoming the women’s World Champion in 1991 and retaining her title in 1993. After consistent progress, China’s Women’s Team won 1st place in 1998 Olympiad for the first time and have since won the silver medal in 2010, 2012 and 2014.

In 1993, the Chinese Chess Association received an endowment fund from Singapore businessman S T Lee who donated the equivalent of over £800,000; it still receives generous government support.

During his reign as World Champion, in 1997, Anatoly Karpov played three exhibitions in Beijing which were broadcast live on television providing something of a wave of interest. Due to the great popularity, he was invited back for a second visit the following year extended to Beijing, Shenyang, Shanghai and Guangzhou. Karpov autographed books for vast queues at major bookstores and sold out of the 20,000 copies. Chess fever had bitten and in 1998, for the first time, Chess overtook Xiangqi in championship entries.

In 2014, in Tromoso, Norway, China finally won their first Olympiad to become current holders; the highest ranking country in the World with the highest average rating for the country’s top ten players. There are now more than 1,000 chess trainers in China, including around 380 professionals.

Hou Yifan became the youngest player to participate in the FIDE Women’s World Championship at the age of 12 and, having won the title twice, overtook the longstanding Judit Polgar to be ranked World’s strongest woman in 2015.

My prediction is that the next chess superstar after Magnus Carlsen will come from China.

So now, on exit from a Chinese restaurant, I have a healthy respect with the appreciation that not only could they likely somersault kick me into the middle of next week, I would probably get mated in less than 20 moves.