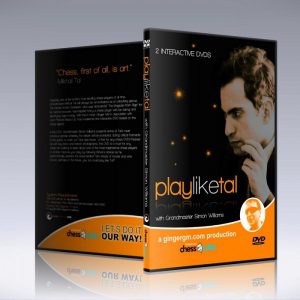 I really enjoy watching the highly entertaining (and instructional!) Blitz games by Simon Williams on YouTube, it is always a pleasure when my phone pings to inform that he has added another. Since there is no contribution mechanism, I thought that I should at least buy something from him so I sent for his ‘Play Like Tal’ double DVDs.

It turned up very promptly which, whilst pleasing, was pretty much wasted on me because it took me ages to getting around to watching it, especially since it contains around 7 hours of material.

The DVDs take the form of several interactive games from one of the most iconic players of all time. Interactive in the sense that the games are stopped at key moves with the viewer being invited to select the correct one from a number of offered candidate moves. “Piece of cake”, I thought, it will simply be the most outlandish attacking move.

In practice, this turned out not to be the case. The candidate moves are ALL outlandish attacking moves but only one of them actually works. If you select an incorrect move, the reason for failure is meticulously explained before being offered another chance. My only real criticism here is that when it your turn to think, the most bloody awful sound is played to make thinking pretty impossible which makes it necessary to be constantly turning the sound on and off.

The games are outstanding and very well annotated and the interactive element adds a great deal.

So can I now play like Tal? No. In fact, it has demonstrated all too well that the gap between me and the great man is even wider than I feared.

So was it of any real benefit? Most certainly. The biggest difference that it has made is to widen the net for candidate moves which is a highlighted weakness because in many of the games that I lose, the move that would have saved the day did not even make it into my candidate list.

After a number of lunchtimes taken up watching more of his YouTube exploits, I will most definitely be buying another of his DVD offerings.