A film sequence that has always stuck in my mind, as an admirer of both chess Grandmasters  and secret agents, is from the Bond movie ’From Russia with love’.

The Arch Villain is playing in a Grandmaster tournament in Venice when he receives a glass of water on a paper coaster. When he takes a drink, he reads a message through the bottom of the glass that informs that he is needed immediately. In response, he suddenly goes into hyper mode and makes a move that makes the crowd murmur. Next move, his Grandmaster opponent resigns with “My congratulations Sir, a brilliant coup” thus re-enforcing the public idea that if a chess Grandmaster has sufficient brain power, he can conjure up a brilliant mate in two from almost any position, invariably beginning with a check, that will even catch other Grandmasters unawares. 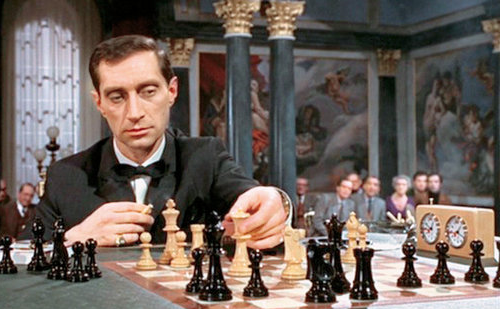 This is quite an amusing public view of chess from those fortunate enough not to have been infected by it. I am a self-proclaimed Patzer but even still, the fact that I have sometimes been seen trying to fathom out a chess book has meant that on more than one occasion, I have had the offer of a game rejected with “Not with you! You’d probably beat me in about ten moves”. Generally, I have enjoyed the suggestion too much to put them right but you and I both know that this is greatly misguided. By obeying certain principles, even I would take a fairly substantial bet that I could survive twenty moves against anyone from a Bond villain to Magnus Carlsen.

That is not to say however, that checkmates can’t sometimes magically appear from seemingly nowhere. In my case unfortunately, they don’t usually come about as a sudden requirement to go into warp mode to summon up a quick win; rather, I am on the receiving end and it usually involves a too neglected back rank – and “My congratulations Sir, a brilliant coup” are not generally the first words that come to mind.

I have played a number of brilliant sacrificial winning attacks in my time that have ended in a surprising win, although these have admittedly generally been desperados that I have only claimed as brilliancies after the event – and I have usually been able to hide my surprise. So, I guess I will have to remain content with enjoying the exploits of ‘real’  Arch Villains and Grandmasters.